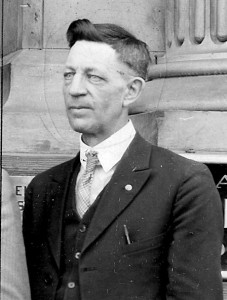 We trace our roots back to about 1909 when Frank Davidson and Edmund G. Harris, bought the George G. Doyle Plumbing Company. They changed the name to Davidson & Harris Plumbing Company, which was located at 143 E. 2nd South in downtown Salt Lake City. Davidson later retired from the company in 1920 and Harris changed the name to the E.G. Harris Plumbing Company. The Harris-Dudley Co. was formed in 1931 when John W. Dudley (right) purchased the company from Edmund Harris and retained his services for one year. Harris then moved to San Francisco for health reasons. He passed away in 1936.

John W. Dudley began plumbing around 1899, when he moved to Salt Lake City from Montana. Apparently, he took some classes at the LDS Business College and started his apprenticeship with Carthey & Dumbeck Co. In 1904, he was employed by Will Rees Plumbing Co., where he remained until 1912. At that point, he went on his own by purchasing Irving M. Higley’s Plumbing and Lighting business and renamed it the Higley-Dudley Plumbing Co. They had a shop at 109 East First South, Salt Lake City, which featured a showroom with both light fixtures and plumbing fixtures. Higley-Dudley Co. continued until 1917 or 1918 when John W. Dudley decided to quit the plumbing business and run a fish hatchery in the Millcreek area of Salt Lake City. After a year or so of the fish business, he returned to plumbing with the Will Rees Plumbing Co. He continued with Will Rees and eventually became the corporate secretary in 1922, and the secretary treasurer in 1929. In 1931, he went out on his own again and became the owner of the newly incorporated Harris-Dudley Plumbing Co. 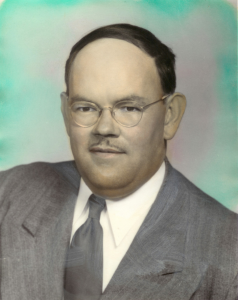 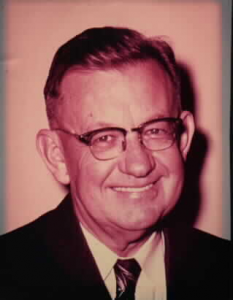 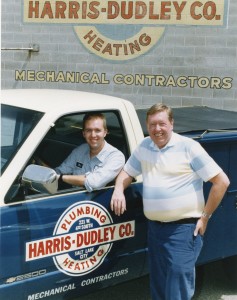 John R. Dudley (left), President, began working for the company over 40 years ago. In 1958, he completed his apprenticeship and became a licensed Journeyman plumber. He served on the Utah Apprenticeship Council for 19 years, served as President of the Utah Mechanical Contractors Assoc., and most recently served 13 years on the Utah State Plumbing Examination Board.

John Michael (Mike) Dudley (left)  completed his apprenticeship and became a licensed Journeyman plumber in 1988 and graduated from the University of Utah with a degree in Mechanical Engineering in 1992.  Mike has received his Master Plumber certification.  Mike is also trained in the United States and Europe in Hydronics production and installation techniques.

Bob Dudley completed his apprenticeship and became a licensed Journeyman plumber in 1990 and graduated from the University of Utah with a degree in business in 1992.  Bob has served as President of the RPA Utah Chapter and been Chairman of the Utah State Plumbing Examiner’s Board.  He is currently a member of the Uponor Contractor Advisory Board and also serves on the TACO (“Thermal Appliance Contractor”) Advisory Board .  Bob is trained in the United States and Europe in Hydronics production and installation techniques. Bob has received his Master Plumber certification. 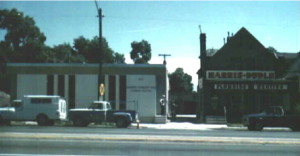 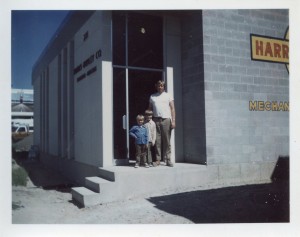 The photo on the left is of John R. Dudley, the current owner, and his two boys Mike and Bob. It was taken in the doorway of the new shop (see above) in 1972. Mike and Bob are currently part owners, making them the fourth generation of Dudley’s to own the Harris-Dudley Plumbing & Heating Co.

In March, 2004, the Harris-Dudley Co. relocated to a new, state of the art facility. Located at 3039 South Specialty Circle, the 19,000-square-foot building features increased inventory space, fleet parking, and a radiant-floor, heated showroom where customers can view products.